Things like Super Bowl champion, two-time Pro Bowler and two-time Madden Most Valuable Protectors Award winner are achievements you can find on Jermon Bushrod’s NFL résumé. But there’s something the nine-year veteran has been doing since 2009 that has helped make a difference that isn’t featured on live television every week throughout the season. That’s the work he puts forth through his Visualize and Rize Foundation, a foundation he created to inspire youth to become leaders and positive influences in their communities.

This year he is hosting the 5th Annual Visualize and Rize Radley Chevrolet and Cadillac Celebrity Golf Tournament and the 6th Annual Charity Football Campto benefit the local youth on June 12th and June 13th in his hometown of King George, Virginia.

“We’re switching up our format a little bit this year, because in years past we did two tournaments and it can get to be a long day, so this year we’re doing one big tournament and we’re going to have more opportunities not just to give, but you know, kind of things just to do with the whole contest,” said the Chicago Bears offensive tackle when asked about this year’s golf tournament.

The tournament plays a key role in helping raise funds for the Visualize and Rize Foundation Scholarships that are given out to local youth. This year the foundation gave out $11,000 worth of scholarships to 22 student-athletes from seven high schools.

“I have a tremendous support staff in Virginia, my family and everyone else who helps get the ball rolling on the golf tournament and the youth camp,” said Bushrod.

“I can always rely on my offensive linemen to come out. I can always rely on my close friends to come out. In the past I’ve been able to get guys to come from New Orleans to the tournament for the past three, four years. I’ve gone to guys’ tournaments a couple of times. We have great relationships that stem off football but then it gets to the point where these guys that I bring in are kind of like family. They have great relationships with my family and they look forward to seeing them. It’s just, overall, a good family environment.”

His youth camp is another thing that he is very proud of and something he puts a lot of time and effort into. Just like he mentioned about having a group of guys who become just like family, he appreciates the help he gets from them and everyone else who help make the youth camp possible. It may sound like the camp is only for local youth, but he does what he can to get everyone involved.

“Everyone that’s helped put this together and organize this has done a tremendous job making sure that we have the right amount of kids signed up. I believe we sold the tournament out this year again, in nine hours 320 kids signed up, so you know, we’re just trying to get the kids out there for a special little event, a special day that they can enjoy, that the players coming out can enjoy, and the parents who bring them can enjoy as well, because it’s not just about the kids, it’s having the families out there cheering you on and getting to know everyone in the community.”

The Visualize and Rize Foundation has donated over $140,000 over the past five years to local youth programs, including the King George High School football program, the King George YMCA, and in the form of book scholarships to graduating student-athletes from King George High School and six other surrounding schools in the region. He’s been able to make a difference in the Chicago area as the Foundation donates game tickets to under-privileged local youth, along with food and clothing to those in need during the holidays. Offensive tackle certainly is the right position for Bushrod as his job is to help someone else. His mentality off the field is clearly the same, work to help someone else. 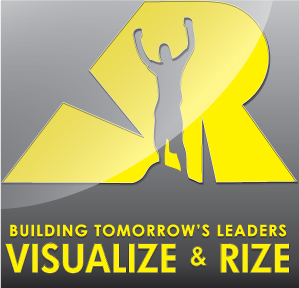 For more information on the Visualize and Rize Foundation, visit http://www.visualizeandrize.org