A heart worthy of gold

Every two years we are amazed, entertained and inspired by the numerous athletes gathered from all over the world who come together to participate in the Summer and Winter Olympic Games. Each Olympian’s love and passion for their home country creates a special bond between themselves and their fans that can’t be matched by any club, team or player. A true Olympian doesn’t become a hero simply for their moment of fame and glory, but through the work and dedication they show back home to those in which they represent.

American sprinter and 2008 Olympic gold medalist Mary Wineberg is a hero for reasons far beyond her gold medal and many successes on the track. She is a sincere, active role model in her community and gives countless hours to improving lives of so many children in her hometown of Cincinnati, Ohio. Involved in programs such as Girls on the Run, as well as assisting at the University of Cincinnati and constant visits to children’s hospitals, Mary Wineberg is a perfect example of a true Olympic hero, something she has always strived to be.

“When I was in college we had a lot of different volunteer opportunities that the student athletes could do, so I just made sure that I was always involved in that. Giving back to organizations such as Habitat for Humanity and going to the different schools and speaking as a student and an athlete to all of the children just giving them hope of different things they can do when they get older and grow up,” Wineberg explained.

“Before I really got into my track career I used to be a teacher and I worked with inner city children. I thought that there was just a really large need for those particular individuals and children to just see a mentor and see someone doing something positive because those kids had a lot of issues in terms of the inner city with going to jail, stealing, selling drugs and things like that, so I’m a big advocate for children and really working with the children,” she said.

As she became fully involved with track and her career, Wineberg continued to serve children of the community and has been a constant supporter and familiar face with Girls on the Run where she teaches, motivates and encourages young girls to stay active and follow their dreams.

“I think I bring so much energy into the program that the girls just get super excited and I think that it helps that it’s a running event. The girls run 3 km so it’s a long distance race that they run. I’m a sprinter but I don’t mind cheering them on, it just brings tears to my eyes to see girls who have never done anything like this before and they train all year for this race and they are literally crying as they’re crossing the line and if I see someone that needs some motivation I’ll jump in the race and encourage them,” Mary elucidated.

“I’m a big advocate for Girls on the Run just to get girls to see that they can be empowered and that they can do something with themselves and that they don’t have to be ashamed of running and being out there trying to be like the boys,” she added.

Mary also helps out at her former school, the University of Cincinnati, and provides mentorship for the young athletes trying to juggle education, sports and their social lives. One way she teaches the young student athletes is having them attend the Girls on the Run events.

“I bring the students into the mix and I think it helps out too because these young girls at the event are able to see these young college girls really help out by painting faces, they help me with the stretches, we dance with the girls and really get them pumped up for the race, so I think it’s exciting for the girls I work with at UC to also give back and see that I’m giving back there and hopefully make it a tradition that gets passed on,” said Mary.

Alongside mentoring other young athletes and girls to be active within running, Mary also makes continual visits to children’s hospitals and runs after school programs once a month in which she speaks with the children about having goals and doing your best to reach your goals, regardless of what those around you think or say.

“It’s all about the youth actually writing goals down and trying to achieve them instead of just settling. I was always taught that you always go after whatever you want to do or be in life instead of listening to someone tell you what you can’t do,” Wineberg said.

“I’ll be doing some things at children’s hospital again and I enjoy doing that because you have these children who are sick with cancer or any other issues and they’re excited, they are happy, they have smiles on their faces and if they don’t, once they see the gold medal or see me then they start to smile and that really brings a tear to my eye,” explained Mary. “I could never complain about anything because if I were in their shoes what would I do? I’m so thankful for the opportunity to be helping and if I wasn’t and I was in their shoes I would want someone to do the same for me.”

For more information on Girls on the Run, visit http://www.girlsontherun.org/ 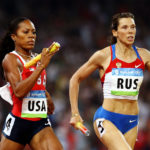 A heart worthy of gold