Many of today’s athletes got involved with community and charitable efforts at a young age, but it’s very rare to hear a story of an athlete who started working with a specific organization at a young age and to this day continues to make it their number one priority. Robert Ravensbergen, an offensive lineman for McGill University, started working with Sun Youth; a local charity in Montreal, Quebec, that provides a highly personalized service and implements new programs to improve the current situation of its clientele through education, awareness and material assistance when he was just a kid playing minor football.

“After seeing all the different types of people that were coming through it, I felt like it was such an interesting experience overall and it had a lot to offer in terms of learning and growing as a person.”

Sun Youth has many programs to offer the community. From keeping kids out of trouble with their crime prevention programs or keeping them motivated through their sports and recreation programs, they are doing whatever they can to help improve the quality of their community.

“Other than football,” chuckled Ravensbergen, “My favourite would be the Bike Patrol program. It is a really great experience and I get to work with a lot of great people from different backgrounds,” he explained.

The Sun Youth Bike Patrol patrols the streets of Montreal. During a 10-week period from early June to mid-August, they participate in certain activities and operations with the Service de Police de la Ville Montreal (SPVM). They help in various missing persons search operations, give prevention tips, report violations, keep a watch on the bike paths, parks and swimming pools and are present in schools and day camps, provide first aid and visit senior residences.

Another program that Ravensbergen enjoys taking part in is the Sun Youth Christmas Basket/Holiday Hamper Drive.

“The Holiday Benefit Program has a bunch of local businesses donating supplies and food and amenities for needy families during the holiday season, so participating in that is something I love doing,” he said.

“Making a contribution in the community makes you feel really good just knowing you’ve made a difference and to do that during the holiday season is very special.”

As someone who has been active within the community since the age of 10, Ravensbergen believes that professional athletes have the choice to help out or not, but thinks that everyone should get involved and want to help, not have to.

“I think that helping out with a charity or in the community is up to the individual. Sometimes if you force yourself to participate in something like that it can be counter productive if you’re not genuinely interested,” stated the offensive lineman.

“I see no reason why anyone would not have an interest in helping their community grow though. I do think that pro athletes and high-level amateur athletes and public figures need to take into account what kind of influence and vision of citizenship or virtue that they project to the younger people and to families and communities in general.”

Being a Montreal native, Ravensbergen has always been determined to help his city grow. Playing for McGill, in his hometown, gives him that extra drive to make a difference and get others involved and with help from his new head coach, Clint Uttley, every player on the team has started helping out within the community and making a difference however they can.

“Our coach has made it a strong emphasis to start engaging in the community. We participated in a Walk for the Cure last semester and that was the first event we did as an entire team,” said the 2012 All-Star.

“We also had an introductory thing with Big Brothers, Big Sisters out of the West Island and we might be doing more events with them down the line, and he’s also interested in working with Sun Youth as well,” he continued.

“McGill and Sun Youth are very close geographically but they represent a different set of experiences and to be able to bring them together I think it would create something very special for everyone.”

Aside from doing great things in the community and on the field, Robert also excels in the classroom. While he was in high school he tutored kids from Bancroft Elementary School and was also selected as his class’ valedictorian. He is currently a history major at McGill and has always put a significant emphasis on his studies. Like many others he plans on playing football for many more years, but he has already ventured into a future profession as he recently penned a novel, which he has yet to publish.

“I’m very passionate about reading and books and learning about the world,” explained Ravensbergen, who would one day like to share his love and passion for literature with kids everywhere.

“I think that if I can give one kid that passion about growing and discovering through books and reading and show them how much information they can discover about the world in such a short period and how much they can grow as a person through reading, that would be really fulfilling for me and I think that it will really help people in general,” he concluded.

As someone who will be looked at in upcoming drafts, Ravensbergen would love to play pro football, but more importantly, would love to help change people’s lives for the better and show them how much is really out there for them to discover and how much they can grow as a human being. 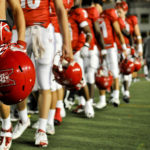