Calen Carr continues to get others involved

Calen Carr of the Houston Dynamo was lucky enough to grow up around positive role models. His mother, a professor at the University of California, Berkley, was always able to lead him in the right path and teach him how important it is to help others. Today, because of what his mother instilled in him at a young age, Carr is working with the Big Brothers Big Sisters mentoring program at Rusk Elementary; a school near the Houston Dynamo’s BBVA Compass Stadium.

“When I was really young my mom used to bring me to help out with my grandmother who helped me a lot growing up. She fostered that, helping others, into me at a young age,” explained Carr.

“She also fostered into me some of the ideas of social justice. Those principles are what I learned first and as I got older I became able to do more.”

Carr, who was named the MLS WORKS Humanitarian of the Month for April, is an Oakland, California native who grew up watching the Oakland Athletics, an organization he truly admired for how active their players were in California’s Bay Area.

“I remember being a big fan of the Oakland Athletics when I was a kid; I idolized the guys on the team. I remember Dave Stewart did a lot in the community and I really looked up to him for it,” said Carr.

“I think that being a professional athlete, it makes it a little easier to reach out to the kids because they are a little more attentive to what you have to say.“

As someone who enjoys spending time with the children and works with Big Brothers Big Sisters, Carr has been able to get other members of the Dynamo on board with the on-site tutoring program.

“Once a week you go and hang out with your Little Brother or Little Sister and that’s been really great so far. We currently have 15 people from the Dynamo’s front office, including Chris Canetti our team president, who go and be Big Brothers and Big Sisters,” described Carr.

“He [Canetti] has allowed all of the front office to go and help out when they can during the week and the time that they spend there doesn’t have to come out of their lunch hour and it won’t be held against them, so he really encourages them to help out.”

Drafted 10th overall by the Chicago Fire in the 2006 MLS SuperDraft, Carr is very grateful for where he is at in life. He continues to spread positivity into the lives of today’s youth and works with them as much as he can.

“I like hanging around the kids. For me, helping out the kids is something that I wanted to do because I really enjoy it. I love their spirit and curiosity and their positivity. It reminds me of what it was like to be that age and makes me understand that people need a positive role model,” stated Carr.

Being recognized for the work that you do throughout the community is always great, but it’s never the reason why you do it. You do it so you can try to change the lives of others and help spread the positivity so that others will follow in your footsteps and become active as well. Carr is thankful for being recognized and everything that the fans do for him and the entire MLS, but he wants to make sure that his actions are recognized for all the right reasons, and that’s getting others in the community to become proactive.

“I would really like to see in the next year is a lot of the fans and members of the community become Big Brothers or Big Sisters if they can. They’ve really done a great job coming to the events and helping me raise money, but I would really love to see if a lot of them can help out that way as well.”

Calen Carr and the Houston Dynamo continue to make a difference in the community anyway that they can. Through their various team and player programs, they continue to keep the fans happy through their efforts on and off the field. With the amount of players on the Dynamo that have their own program, it wouldn’t be surprising to see another member of the Dynamo get recognized for a future MLS WORKS Humanitarian of the Month Award. 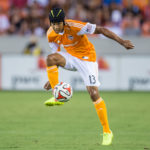 Calen Carr continues to get others involved