Chevon Walker looks to become the hero he missed out on

In today’s age of professional sports, a hometown hero is someone who not only delivers from whistle to whistle, but someone who delivers while the spotlight is off. Hamilton Tiger-Cats rookie running back Chevon Walker has made a positive impact on the field for the Ti-Cats so far this season. His spark of energy has been a positive sign in what has been a disappointing season so far for Hamilton. His commitment to improve on the field has been a reflection of the man off the field. The 25-year old Montego Bay, Jamaica native says he looks forward to working with the Tiger-Cats when they begin their work within the Hamilton community, and becoming a positive role model to his young fans.

At the age of 10 Chevon moved to Fort Myers with his father, an experience that would ultimately lead him to football through a winding road of emotion. Family struggles and urban temptations led Walker on a bumpy path, but fate mixed with hard work would land the Sioux Falls graduate in the CFL with the Hamilton Tiger-Cats. His own experiences have made him aware and anxious to guide youth who face adversity and difficult choices as they grow into adulthood.

“I never really had an idol or hero growing up but I always knew I wanted to eventually give back to the kids,” mentioned Walker. “I guess playing football, in the eyes of the kids you’re someone that can help persuade their dreams and I’m sure there are kids out there that don’t have the support they need, so for me to be able to be a role model is special and important, not only to myself but to those kids who don’t have that proper support,” he elucidated.

Aside from fulfilling his duty as a positive role model within the Tiger-Cats organization and in the community, Chevon Walker is a proud father and says passing along the value of giving back is something he strives to teach his son.

“I definitely want to teach my son to give to others and help out in the community because you just never know, someday you might be the one who needs someone,” he expressed.

A good majority of professional sports franchises, if not all, require their player personnel to participate in community events and become a true member of their city through the difference they make within it. Like the sport they play, some athletes shine in these situations, giving all they have to those less fortunate. For others, it takes time and familiarity until they start to progress in this aspect of being a professional athlete. For athletes like Chevon Walker their part in the community comes with the blessing of living a life long dream.

“I enjoy it, I think it’s a great feeling looking at the kids who look up to you. I feel like me giving back is a blessing and I love doing good things and having kids look up to me, it’s definitely a good thing,” Walker concluded.

Those who truly make a difference are those who truly enjoy making a difference. Chevon Walker will become a star in Hamilton, not only because of his speed and agility, but his heart and desire to become the role model he envisions. 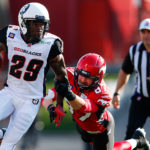 Chevon Walker looks to become the hero he missed out on