At a first glance, Winnipeg Blue Bombers long snapper Chris Cvetkovic can seem like a daunting character. Standing at 6-foot-1 and weighing in at 243 lbs, Cvetkovic has been a part of the Blue Bombers organization since 2005 and has been a key member to the team on the field and off. A highly active member in the community since joining the team in 2005, he has helped out with various organizations and charities the team works with. Aside from the work that he does in the community with the team, the big man from Hamilton, Ontario, is also an avid animal lover. In February of this year he started Cvet’s Pets in hopes of assisting in Winnipeg’s no-kill animal rescue programs.  Through various fundraising efforts and upcoming projects, Cvetkovic has been able to help the animals he loves so dearly.

“I’ve been living in Winnipeg for a while now. I’m from Ontario, but I was involved a lot of community work here with organizations such as CancerCare Manitoba, Children’s Literacy, and Children’s Hospital, but there was nothing really tailored to the animal community and I’ve got a soft spot for animals,” explained Cvetkovic. “Both of my dogs are from a shelter and so is my cat, so I thought; ‘Hey, why don’t I start something?’ There’s nothing like it out here and it just started snow balling from there,” he continued.

“What we did this year was we selected five no-kill rescue programs and put on fundraisers for them. We’ll have paintball tournaments where a place like Paintball Paradise will let 30 of my teammates and myself all paintball for free and then all the money raised goes to the various charities. We also do calendars, t-shirts and social events. With this we’ve been finding a lot of people who really embrace the whole animal community just like I do and there’s really a number of amazing people out there,” he elucidated.

With assistance from the Winnipeg Blue Bombers organization, Cvet’s Pets receives additional advertising through the team and is able to embrace his spot on the roster to further the outreach and awareness he has on the Winnipeg community, something he feels is important to their success.

“To be affiliated with the team is good because essentially what gets me in with all the sponsors and events is what I do for a living, being a professional football player and being a member of the Blue Bombers.”

With Cvet’s Pets not even being a full year into operation, Chris is thankful for the outreach they have had so far and hopes to expand and take the project nationwide. Aside from his own events, Cvet’s Pets is also involved with the various events held by different rescue programs within the Winnipeg area. By attending with fellow Blue Bombers, participating in signings and the sale of Blue Bomber pennants, which are donated by the Bombers organization, all proceeds are given to the no-kill animal rescue programs that host the events.

Cvetkovic will also be busy this January as he and several CFL players will be working with CANDi International, whose goal is to raise awareness while controlling the animal population.

“CANDi International is a doing a project with me in January and they are giving me the opportunity to hand-pick seven CFL players and we’re going to be going down to Mexico to work at an animal sterilization center for a week. There’s a good group of guys from Southern Ontario coming out and I’m really looking forward to this chance,” Cvetkovic said.

A hard working athlete throughout his career, Chris Cvetkovic has put his heart and passion into Cvet’s Pets and helping the animals he so dearly loves. His work in the community with the Blue Bombers has not ended as he continues to work hard to give back to the various causes he has helped with over the past seven years.

“My parents always instilled in me to give back any chance that I could and for me it started in college. I was in school so I had no money to give back but I would donate my time and I’d volunteer at the Montréal Association for the Blind,” explained the long snapper. “I’d work with the special needs kids swimming program there and then once I turned pro the CFL gave me the platform to use my profession to do charity work and give back to the community around me. I jump at every opportunity to work with any charity or organization out here and it means a lot,” he elucidated.

“The way I was raised was to help out in any way that I could. If it’s helping someone build a deck, help them build a deck. If someone needs help crossing the streets, you help them cross the street. My parents were very adamant about that.”

Chris Cvetkovic and the many CFL players he works with take pride in putting a smile on people’s faces or saving the lives of defenseless animals, a truly refreshing site in a world that can seem all too gloomy. 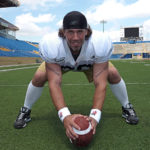