Despite being absent from the game since January 5, 2011, Sidney Crosby has remained active within the NHL community and his own community which he grew up in. For the last few months his name has been all over the media for all the wrong reasons. Will Crosby be able to return for the start of next season? Will he ever play again? Will he be the same player? These are all questions that have been repeated day after day around the sports world but have not received any answers. Although he’s been out with a concussion and has been playing it safe by not rushing back, Crosby’s injury has not taken him out of the game entirely.

A few months ago Crosby announced that he would donate the proceeds from his winning gold medal to the Sidney Crosby Foundation; an organization created in Nova Scotia in 2009 that is committed to providing financial support to charities that are beneficial to the community as a whole, specifically charities benefiting children. In 2009, Crosby created the Foundation with the hope that one day he would be able to give back to local communities like the one he grew up in. The $20,000 he ended up donating to the Foundation to help children achieve their dreams was matched by Bell Canada.

With his focus not solely on one charity, Crosby likes to help out as many charities as he can that help out with children. He purchased a luxury suite at the old Mellon Arena, as well as their new CONSOL Energy Center, where he invites a couple of families from local charities to come out and enjoy the Penguins home games with their children throughout the season. He does a lot of hospital visits as well in the city of Pittsburgh and back home in Nova Scotia, where he gets a first-hand look at the different kinds of adversity others have to live with.

He has done charity work with multiple charities such as; Make-A-Wish; Big Brothers Big Sisters; the Boys & Girls Club; Special Olympics of Allegheny County; The Bone Marrow Transplant/Oncology Unit of UPMC Shadyside; The DePaul School for Hearing and Speech; and many others to add to the already admirable list.

Last summer, Crosby helped redevelop the teen lounge for patients at the IWK Health Center in Halifax, Nova Scotia, which is near his hometown of Cole Harbour. The teen lounge is a gathering space designed to meet the unique needs of patients 12 years and older. It is a place for them to experience and enjoy some of the normal interactions that their peers also enjoy. The lounge provides group activities like cooking, crafts and games for special events like birthdays, holiday parties and special visitors like Sidney. While the refurbishing was taking place, Crosby spent some time around the building interacting with patients and supporting the project in it’s entirety.

Although there currently is no time table on his return to the game, Crosby is staying active and remaining the champion that he is off the ice. He has been helping out small communities and charities, while sending a hidden message to children everywhere that it is alright for them to sit the next one out of they are injured, especially if the injury is a concussion. He is a Stanley Cup champion with the Pittsburgh Penguins and a hero to the people in the Maritimes. He is the poster boy for hard work and perseverance, not just hockey and the NHL. 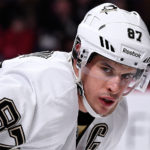