Becoming a professional athlete is becoming more than just a soccer or hockey player for a living, you become an icon and role model, especially for those who are looked at as superstars. For some athletes, taking on this responsibility is second nature and is an element of their everyday life. For Scarborough, Ontario native Dwayne De Rosario, the aspect of channeling his professional success and status in Major League Soccer into a positive for the less fortunate has been a blessing. The New York Red Bulls and Canadian National Team midfielder has accomplished many awards and heroic moments on the pitch, and has many more off.

De Rosario is an ambassador for multiple organizations aimed to benefiting the lives of the less fortunate not only in North America but also around the world.  During visits to Mali and West Africa, Dwayne visited villages and clinics delivering life saving bed nets, as well as leading soccer clinics for local children in West Africa. Since then he has multiplied his efforts and has continued to support multiple charities and Malaria prevention causes. A member of the Nothing But Nets campaign and its Canadian counterpart Spread the Net, De Rosario is dedicated to help provide bed nets to African children in efforts to prevent Malaria; which is the single biggest killer of African children under the age of five and accounts for one fifth of all African children’s deaths.

Dwayne is also involved in MLS W.O.R.K.S; a Major League Soccer initiative dedicated to helping youth by addressing important social issues affecting young people. Through the numerous caps in a Canada jersey and his numerous accomplishments in MLS, De Rosario has not forgotten where he came from. The De Ro Futbol Clinic is based in his hometown of Scarborough, Ontario and it teaches kids the fundamentals to not only become a good soccer player, but a good human being as well. The program created by De Rosario provides children with certain skills needed to be a sufficient player on the pitch and the day-to-day qualities needed in everyday life including fitness, health and money management.

An ambassador to the United Nations, Dwayne is also a part of Right to Play; a charity dedicated to helping children in some of the most disadvantaged areas in the world through the power of sport, love and peace. Other athletes involved with Right to Play include Jose Calderon of the NBA’s Toronto Raptors and Alexander Ovechkin of the NHL’s Washington Capitals.

Dwayne De Rosario has been the male Canadian Player of the Year four times in the last five years, has received the Goal of the Year Award twice, was the 2008 MLS Cup MVP and has scored close to 100 goals in Domestic League play. He is a member of countless charities and has donated a lot of his time and money to support and benefit the less fortunate and is a superstar that is willing to shine his light in some of the darkest areas in our world.

To learn more about Spread the Net, visit http://www.spreadthenet.org/

To learn more about Nothing But Nets, visit http://www.nothingbutnets.net/

To learn more about Right to Play, visit http://www.righttoplay.com/International/Pages/Home.aspx 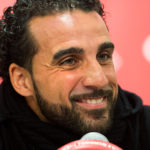