MLS W.O.R.K.S. is asking fans to join Major League Soccer and Take the Pledge not to cross the line. The pledge that they are asking you to take is to treat others with dignity and respect and not to tolerate discrimination, bias, prejudice or harassment of any kind.

Major League Soccer is committed to supporting the communities where we live and play our games, and to providing an environment in which our staff, clubs, players, partners and supporters are treated with dignity.

Through Don’t Cross the Line, MLS W.O.R.K.S. is hoping that with the help from MLS players and MLS clubs, people everywhere will stop crossing the line and start treating everyone equally and with the respect that they deserve as a human being.

Several MLS players joined MLS W.O.R.K.S. to film a public service announcement that is running on local, regional and national broadcasts, as well as in all the stadiums throughout the rest of the season urging fans…Don’t Cross the Line. Dwayne De Rosario, Kyle Beckerman, Landon Donovan, Graham Zusi, Carlos Valdes and Chris Pontius all got together to take part in the public service announcement to help spread the word of Don’t Cross the Line and to get a positive message across to fans everywhere.

They all took the pledge, now it’s your turn.

For more information on Don’t Cross the Line, visit http://www.mlssoccer.com/mlsworks/dontcrosstheline 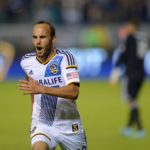