If there’s one player who understands the importance of remembering where you came from and where it all began, it’s Pro Football Hall of Famer and former Denver Broncos running back Floyd Little. Known by the Broncos faithful as “The Franchise,” Little was always a game changer during his playing days, and now focuses on being a life changer during his life after football.

“I’ve always done things like this, which is probably one of the reasons why I’m back here at Syracuse University. Every time they needed something from somebody for whatever reason, whether it be to close the old stadium or to present something, I’ve always been there for the community and have been a #1 Ambassador for this University for the past four decades,” explained the New Haven, Connecticut native.

“It is such a blessing to be back here to help change lives. I was a game changer years and years ago as a player, and now I want to be a life changer.”

Someone who is no stranger to helping out within the community and with whatever charities he can, Little has been recognized over the years for his humanitarian efforts that he has continued to put forth, wherever he may be. Now, working as a public speaker for Touchdown Presentations, LLC, he continues to make his mark on the community just like he did when he wore the number 44 on his jersey so proudly.

The former member of the Syracuse Orange has lived his life following his own recipe to success.

“Drive, determination, dedication, desire, commitment and sacrifice. If you have these ingredients you can achieve whatever you want. I have doctors and lawyers telling me about how they remember me telling them this when they were in school and now they’re living a successful life and passing this advice onto their children,” he said.

As a member of both the Pro Football Hall of Fame and the College Football Hall of Fame, Floyd Little understands that you are in control of your own destiny, no matter what others have to say about you. He is somebody who others didn’t have a whole lot of faith in while he was growing up, but used his recipe for success to become the humanitarian and role model he is today.

“Don’t let anybody limit you and never listen to the naysayer. You have the opportunity to grow internally, externally, mentally and physically, but it’s up to you and you have to decide what you want to do and move forward with that and not let anyone tell you what you can’t do,” stated Little.

“If I ever listened to anyone that told me I couldn’t do what I wanted to do, I never would have made it. Don’t let anybody tell you what you can or can’t do, don’t give that privilege to anybody. You can achieve whatever level you’d like to achieve and if you’re willing to make the sacrifice and commitment, there’s nothing you can’t do.”

He believes giving back to the community is what life is all about, whether it is where you grew up or where you now reside, helping out someone else who needs that guidance in the right direction is what we’re meant to do as human beings.

“Life is about giving back and passing on because we can’t take everything with us. Leave your legacy and do things that are beneficial for others, pay it forward.“

If Floyd Little was ever given the chance to own an NFL franchise, he could have helped change the sports world for the better, making players more involved than they already are, making it mandatory for his team to go out into the community and show them how they’re everyday people just like everyone else. It is a philosophy that most teams would have adopted and continued to do today.

“If I was an owner in the NFL, every player on my team would have to have their own charity or be a part of a charity. We would also have to have frequent visits to high schools and junior high schools so people could get to know our players and have an investment in our community. It’s important for the young people to see our players as not only athletes, but as regular people,” explained the three-time Pro Bowler.

“It should be a requirement for players to sign up for charities that they want to support and if they don’t have one, we would help find them one.”

Of course, as somebody who learned his lesson down the road in life, he doesn’t expect everyone to be experts from day one, but he would help lend a helping hand to help them become better human beings and role models that not only the sports community could look up to, but everyone in the community.

“I remember when I was asked to come back and celebrate the 80th birthday of our Headmaster at my old military school. I went up to talk about how grateful I was for everything that he did for me and the opportunity that he gave me,” described Little.

“When he came up to respond he said ‘You don’t owe me nothing, an old lady taught me how to live life and become a prime example and she died before I had a chance to thank her. My helping you thanks her for helping me,’ and that’s what we all have to do, give back and pay it forward.”

Floyd Little was a struggling student. He would get kicked out of school for fights and mischief, so now he takes his own experience and does what he can to help the kids of today who are just like him, hoping that they, too, will one day do what they can to help make someone else’s life that much better.

“I have a scholarship in Connecticut that gives something to someone who is less fortunate like I was and it helps them pursue their dreams, even if they don’t have the highest IQ in the class, it helps them get on that path of doing the right thing for somebody and give back. I see how I can help kids with that same mentality, so that’s why my scholarship focuses on helping young men turn their lives around and do something good for themselves and someone else,” he concluded.

Little continues to shine a light on those who do not have the proper guidance to do something positive with their life. He understands how different everyone is, but sometimes a little push in the right direction and a little confidence booster can go a long way for kids, especially those who may think they have no place in society because of how others judge them based on their actions. He sees the good in every human being and makes it his mission to help them want to be better and do something good for not only themselves, but for others some day in the future. 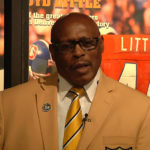