Being a professional female football player, Jen Welter has been through a lot to get to where she is today. Playing 13 years of women’s pro football, 10 of those with the Dallas Diamonds of the Women’s Football Alliance, the Boston College grad has worked very hard to become a professional football player and her hard work has not gone unnoticed. She represented USA at the 2010 IFAF Women’s World Championship in Stockholm, Sweden; where they won it all and took home the gold medal. Now, three years later, Jen will be representing the United States once again, this time at the 2013 IFAF Women’s World Championship in Vantaa, Finland.

“I was blessed enough to be on that team in 2010, but to have made it a second time is pretty breathtaking because I remember after playing the first time all I could think of was how I wanted to play again in 2013,” described Welter.

“The first time coming around, none of us really knew what it was going to be like. They accepted the applications, whereas now they do a two-day combine. It was tougher to make it this year because there were about 200 women from across the country that came in for the two-day combine,” she continued.

“If I’m not mistaken, I was one of 37 linebackers there so it was one of the biggest groups and they were only taking the top 6, so to be selected as a top 37 of 200 people from across the country, it was very exciting.”

Despite being acknowledged for her hard work on the field and getting the chance to represent the US, women’s football does not get the same attention that men’s football does. In fact, the members of the US team have to raise the funds themselves in order to make it out to Finland for the tournament, simply because the funding isn’t there.

Welter started a GoFundMe page online to try to get some help from others to make it out to the tournament.  You can read some of her blog posts that she posts on the page to try to inspire young girls and women everywhere to follow their dreams. You can also see the support that she receives from others, not just through the money that they donate, but also through inspirational messages thanking her for everything that she has done, whether she has met them face to face or not.

“I’ve had people who I have never even met before donate some of the largest amounts to my campaign because they believe in what I’m doing and we have crossed paths professionally, but have never met in person, and that to me is pretty breathtaking,” she continued.

“A majority of my money has come from very strong women who are very successful in their own right and they want other girls and women to grow up with strong mentors in that certain aspect and as we talked about the last time, I think it’s very important for people to see female mentors because it’s refreshing to see that girls can really do anything that they set their minds to.”

Even though some of the people she expected to donate still haven’t donated, Welter believes that some people just aren’t doing anything because they don’t know about women’s football or what exactly it is that they are trying to raise the funds for. However, she always looks on the bright side and continues to do so.

“I don’t think that it’s a matter of those people wouldn’t help, I just don’t think they necessarily know and that’s the bigger thing, that if we didn’t have people who were willing to do it then it wouldn’t get any better. The big thing is that we have this many women from across the country that make it possible to even have this USA team.“

Although female athletes playing major North American sports never get the same respect or money as male athletes, it doesn’t stop them from lending a helping hand. Welter continues to be a motivational speaker and personal trainer and even helps out with some NFL camps that the players put together.

“I’ve done a lot of work with NFL guys by helping out at their camps and supporting their charity events and it really makes me understand how different the world is for them as it is for us [females]. I know that it makes all of the successes that much richer for us and we don’t take it for granted,” explained the 4-time World Champion.

“A real astonishing fact to me is that a guy making the lowest salary in the NFL, he doesn’t even have to be playing, would be able to pay for the entire USA team and help us reach the goal that we’re trying to reach.”

As someone who tries to be the best possible role model for young girls and women around the world, Welter hopes for future growth in women’s sports. She believes that they will someday get the proper recognition for what they do and that is the main reason why she wanted to be become a professional football player to begin with.

“If I didn’t believe that what I was doing, how I have committed 13 years of my life to playing football, if I didn’t believe that I was going to open doors for future generations of women to come then I don’t know if I would have been as willing to take some hits that I’ve taken personally and professionally to progress to move forward,” she stated.

“It has to be about believing in something bigger than yourself. Like, I would laugh and say that on our team, notoriously, I’m one of the favourite lead blockers on punt return and kick return, or if someone catches the ball in front of me they know that I’m going to look to block and be one of the first people to lay myself out to let one of my teammates score and they’ll tell you the same thing. I don’t really care about who scores the touchdown, just as long as we get that touchdown. If I get that block in there I feel great and if I didn’t think that anything would come from that, would I still do it? I don’t know. For people who are working as pioneers at something, you have to believe that you are clearing a path that other people will be able to follow with less resistance.”

If you would like to support Jen Welter and help her get to Finland, visit http://www.GoFundMe.com/DrWelter47 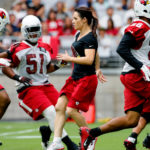