Originally known for his speed on the ice, four-time Olympic gold medalist Johann Olav Koss is a former speed skater from Norway and is considered to be one of the best in the history of the sport. In his final year of speed skating, Koss won three gold medals at the 1994 Winter Olympics in his native Norway, winning all races in what were considered new world records at the time. Now, nearly 20 years after he hung up the skates for good, Koss is making a difference all around the world by educating and empowering children through Right To Play.

Right To Play empowers and educates children in the most disadvantaged places in the world. They use sport and play to educate and empower children and youth to overcome the effects of poverty, conflict and disease in disadvantaged communities.

“When I started it [Right To Play] a bit more than 10 years ago, I saw the mobilization at the Olympics and the incredible abilities to mobilize through sport and I tried to convince organizations to put programs into the field for kids because kids want to play, no matter what,” explained Koss, the CEO and President of Right To Play.

“I believe that playing is a fundamental basic for child development and when nobody wanted to do that I thought; ‘Wow, this isn’t right,’ so started doing it myself.”

One thing that Koss likes to do through Right To Play is talk to today’s athletes and give them an understanding of how important they really are to not only the children in their native country, but to kids all around the world. He usually takes advantage of this at the Olympics, but after being banned from the 2010 Winter Olympics in Vancouver because of a sponsorship conflict, Koss was not able to spread the message across to the athletes like he had done in the previous years.

“I was very sad about not being in the Olympic Village because I believe that one of our missions is to educate athletes on the power that they have, the ability they have to inspire and the role that they can play in the community to create better lives for the children,” stated Koss. “Normally we have that access, but we couldn’t get it because of the sponsorship controversy.”

Koss likes to teach the athletes that there is more to just living in the moment and being focused on their career. He believes that all athletes need to remember where they came from to get to where they are and who helped them along the way, and they have to plan for the future for when they retire.

“There’s always one sure thing for athletes and that is that they retire,” chuckled Koss.

“They need another relation with other work and need to get a better understanding of how they can give back, and that’s why I like what you guys [Pros Give Back] are doing. It’s fantastic because it can give you a purpose and it shows you how driven some of these people are and the goals that they set and how they pursue them and I think that it really helps a lot and is a tremendous way to find a purpose.”

Despite being banned from the Olympics due to the sponsorship controversy, Koss didn’t let that stop him from spreading his message to today’s youth and professional athletes. He has continued to work hard to make Right To Play the best that it can be, that way the kids get nothing but the best in return.

“I feel that our core methodology, the way that we are influencing and affecting behavior, is probably what I’m most proud of when it comes to Right To Play,” said the three-time Oscar Mathisen Award winner.

“Our ability to help a large scale for a low cost is making an incredible impact, based on what we are seeing, and that is obviously something else that I am proud of.”

Johann Olav Koss and Right To Play have plenty in store for 2013 and beyond. They will be hosting their 2nd annual Right To Play Ball at the Shangri-La Hotel Ballroom in Toronto, where Right To Play is headquartered, on Friday, May 10, 2013. Last year they raised over $80,000 in funds and are expected to raise even more this year.

“First of all, I’m extremely excited that we are continuing our success from the first year. We believe we will be raising more money this year, which will benefit more children,” mentioned Koss.

“Personally, I’m excited about meeting DJ Tony from The Ellen Show because he’s such a famous DJ and he’s coming in just for us. I’m very sure it will be a fun time and it will be the happening place in Toronto on Friday.”

As for Right To Play, they have recently established offices in Hong Kong and have some great plans for some further events in the US, UK and in Europe. They continue to build the quality around the kids and Koss believes that bigger things are on the way. 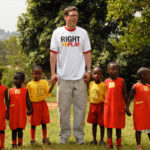