Jonathan Casillas looks to make a difference in Tampa Bay

As a professional linebacker in the NFL, Jonathan Casillas of the Tampa Bay Buccaneers gets paid to throw out the big hits while doing whatever he can to deny the opposing team access to the end zone. Off the field he works just as hard. Learning at a young age the importance of giving back and helping out within the community, Casillas, a Jersey City, New Jersey native, spends as much time as he can at his old high school, New Brunswick High School, the place where he first learned the importance of lending a helping hand.

“I did a lot of things in high school. Every year I did tons of hours of community service. One of the earliest memories that I have was working with the Special Olympics during my freshman year in high school and I also did a lot of work at Elijah’s Promise Soup Kitchen in New Brunswick, New Jersey, where we would give out food to homeless people and people who were staying in shelters,” explained Casillas.

“People like myself and other kids would go in there to volunteer and serve food and kind of give a little bit of comfort to the people in there. I was about 14 or 15 years old when I first starting do that.”

In high school, Casillas was a member of the Play It Smart program, a program that is funded by the National Football Foundation and is targeted towards high school football players from economically disadvantaged environments where family and community support are often lacking. Although he never needed their help with getting his marks up, Casillas was able to learn some of the other things from the program and is very thankful for them and has a lot of respect for what they do.

“The Play It Smart program, not only did it help people like myself who is always up for community service, but it helped people who struggled. Guys had to get 3.5 in their last year in high school and that’s when Play It Smart would make its name, through helping people like that succeed. Not only did it help with grades and SAT prep, but it helped with community service prep as well.”

One of the people that Casillas is most grateful for in his life is his academic coach from high school, Laurie Lazovick.

“Ms. Lazovick, she was one of those dedicated people who cared more about people than her job. She would stay in late nights just for SAT prep and people like that help tremendously,” described the Super Bowl XLIV Champion.

“She was a great catalyst to get me and the other football players from the high school to volunteer and be very active in the community and still to this day, whenever I go back, whether I’m reading to the kids or talking to the high school kids, it still matters because I’m a pretty significant face around my community,” he continued.

Jonathan Casillas signed a one-year deal with the Tampa Bay Buccaneers this offseason after spending the last three seasons with the New Orleans Saints. He has been very eager to get into the community and has already taken part in a fundraising event. Casillas, along with Mark Dominik, Connor Barth, Ahmad Black, Andrew Economos, Mason Foster, Josh Freeman, Ka’lial Glaud, Cody Grimm, Michael Koenen, Dan Orlovsky, Mike Remmers, Cody Wallace and Mike Williams, took part in the Cut For A Cure Charity Challenge in support of the Pediatric Cancer Foundation.

“I’m not going to lie, I cheated the whole cut deal. I didn’t get a ‘baldie’ because I think my head is a little too weird-shaped to get one,” Casillas chuckled. “I had a fro going and I was going to grow my hair out so I cut the fro off, I cut it down pretty low, but going bald man, that’s going to hurt, it was going to hurt my jumbotron picture, you know what I’m saying?” he laughed.

Aside from taking part in the Cut For A Cure Charity Challenge with other members of the Bucs, Casillas has reached out to some teammates about helping out in the area.

“I told Josh Freeman the other week, because he’s more in touch with the Tampa Bay community than I am, I said; ‘Look man, if you have anything community service wise or you need some bodies to help represent the Buccaneers, I’m willing to do that because I love giving back,’” said Casillas.

“I’m from a poverty-stricken area and I try to give back as much as I can where I’m from with what I have access to and I’m just trying to hit the market in Tampa Bay, not only to get my name out into the community, but to also help as much as I can because I’m a little more privileged than the average Joe Schmo.”

Casillas understands the position that he is in and doesn’t take any of it for granted. He worked hard his entire life to get to where he is today and he will work just as hard to stay there. With a genuine love for the game and giving back, Casillas is going to be a key addition to not only the Buccaneers, but to the entire city of Tampa. 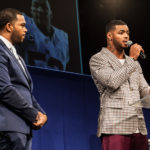 Jonathan Casillas looks to make a difference in Tampa Bay