Growing up many of us have all had the same dream of one day becoming a professional athlete. Scoring the overtime winner; nailing that home run in the bottom of the ninth; or landing that triple-double in a decisive game 7. For most people these scenarios only stay with us in our dreams, but for some, becoming a professional athlete is a reality and a part of everyday life. For Atlanta, Georgia native Kiesha Brown, her dreams of playing basketball came true through her hard work, determination and love for the game she grew up playing. A talented and driven ball player, Brown was the 1995 and ’96 Gatorade Player of the Year for the state of Georgia and won the 1996 National Naismith Player of the Year along side current NBA superstar Kobe Bryant.

Shortly after graduating from the University of Georgia, Brown was ready for the pros and the WNBA, or so she thought. When realizing she was incapable of filling out her required W2 Form while entering the league, the business aspect of basketball and professional sports quickly set in triggering her mind at a fast pace. If she was unaware of how to properly fill out her form, how many other young adults were also in her position? How many teenagers and young children don’t know how to properly save and manage their money, or even start a business?

After asking herself these questions she came about starting the Change the Cycle Foundation. By exposing financial literacy through sports and entertainment and using basketball as the common playing field, the goal of instilling the ability to make educated decisions in real life situations within children became both the foundation’s and Kiesha’s goal. By teaching kids simple financial lessons such as how to open a bank account, or how to save your money and learning the importance of business and its role in not only sports but all aspects of life and adulthood, children are given the chance to make their mistakes while they are young giving them knowledge and experience later into adulthood.

Kiesha credits the training and guidance from former American ball player and 4-time Olympic gold medalist Teresa Edwards in who taught her the importance of the business aspect of basketball and professional sports.

“She trained me when I came out of college to become a better athlete, not only becoming a better athlete but showing me that basketball, it’s a sport when we grew up we loved to play but it’s a business, and knowing and understanding the business is where majority of people are mistaken,” explained Brown. “We as athletes can’t get taken advantage of.”

Aside from teaching and providing children with the business knowledge and aspect of basketball, she also hosts annual camps in the Georgia area. This July’s camp in Savannah is a paid camp with some proceeds going back to the schools who have opened their doors to Change the Cycle. For the kids attending the camp in Savannah, the camps open a door of opportunity of exposure for the small town talents who may not have the financial advantage that other athletes may have to their favor. The chance to showcase their talents to Brown may result in opportunity to receive the extra encouragement and motivation to work their way to scholarships.

Kiesha’s love and care for children and her desire to educate the minds of young athletes in more ways than what they do on the court has been a benefit and blessing for countless kids. In 2003, she received the WNBA Community Assist Leadership Award in the D.C. area for her social efforts. She continues to play basketball overseas, but says her foundation now takes up a lot of her time. Her passion for giving back to the community has made her a humble hero that we can all look up to and admire. 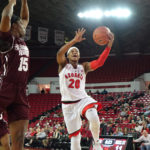