MLS W.O.R.K.S., Major League Soccer’s community outreach initiative, announced details of the League’s breast cancer awareness campaign as part of Soccer Kicks Cancer, an initiative focused on raising awareness and funds for cancer research and treatment and providing strength and hope in the fight against cancer affecting men, women and children. All 19 MLS clubs will conduct one night of local activation to raise awareness and funds for the cause. The initiative began in Kansas City on September 28 during a game between the Chicago Fire and Sporting Kansas City.

Gatorade and adidas are both collaborating with the MLS for this initiative. All of the matches during the breast cancer awareness campaign will be played with a commemorative pink adidas PRIME match ball and players will use pink sideline towels provided by Gatorade during this time. Both corporate and broadcast partners of the MLS will also be supporting the campaign with field board recognition during select matches.

The players and referees will wear a special pink MLS W.O.R.K.S. ribbon patch on their jerseys, pink adidas sweat bands, pink shoelaces and several goalkeepers will use pink gloves to further support the cause.

MLS will be auctioning off game-worn autographed jerseys and special-edition pink match balls online at www.MLSsoccer.com/mlsworks beginning on October 15 as part of their effort to raise funds for breast cancer research and treatment.

The MLS clubs will be doing additional fundraising efforts in their communities, including in-stadium auctions and donating a portion of ticket sales proceeds, and/or hold recognition ceremonies for local survivors during the following home matches: 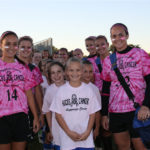