Making an impact twice her size

Throughout her entire life and since the beginning of her basketball career, Ivory Latta has been looking up at every obstacle that has come her way. The 5-foot-6 McConnells, South Carolina native is currently the 3rd smallest player in the WNBA and has always been smaller than the average basketball player, but her heart and drive has led her to become the highest scoring player – men and women – to come out of South Carolina high school and has been known for her three-point accuracy on the court as a pro. She has also become a larger than life figure through her continuous work with various charitable causes and the recent launch of her own women’s basketball camp which opened up this past weekend.

“It’s my first official basketball camp, it’s all girls and it focuses on how you can use basketball to take you to other places. I’m going to teach the girls about being disciplined, not just on the basketball court but in the classroom, and help them realize that education will take them a long way,” said Latta.

“Basketball or any other sport can only take you so far but if you have a great education you can continue to go as far as you can and that’s the main thing I want to emphasize at the camp. Hard work, determination, staying focused and being disciplined on and off the court,” she added.

Though the camp just began, the Tulsa Shock guard expects it to be a year round opportunity and hopes to take it to different parts of the United States.

“The way this is going I’m going to do this camp all year round. From November 24-25 I’m going to Houston, Texas, and from March 23-24 I’m taking it to Franklin, Tennessee, and I know the more this becomes successful more states want us to visit and hold the academy there,” explained the 2006 College Player of the Year.

Ivory says her love for children and lack of role models as a youth are both contributors to her desire to assist and lead today’s young female demographic.

“What motivated me to run this camp is my motivation to helping young girls. I can say young girls because that’s what my camp is right now, but I love helping young children, period. I definitely love children and I know I want to give back to the community because when I was growing up I never really had that role model I could look up to where as these days kids have a lot of role models,” elucidated Latta.

“I’m pretty well known in the Georgia area so I know these girls here that look up to me a lot and it was just something in my heart I really wanted to do to just teach them and hit them at an early age and get them on the right path and just show them you don’t have to be big to be successful,” she continued.

Aside from her involvement and creation of her basketball camp, Ivory is also involved in many other charitable causes. She works very closely with theParkinson’s Disease Foundation promoting and raising awareness about the severity of Parkinson’s disease. The organization and awareness is also something very near and dear to Latta’s heart as her father has battled with the disease for 6 years now.

She has also been active with Habitat for Humanity by assisting in the construction of a home built for a single mother and her children in Atlanta, Georgia, and works with an organization called Cheer for Children based out of South Carolina, doing things like back to school giveaways, end of school activities and yearly children’s Christmas parties. She is also currently writing a children’s book.

“The children’s book I’m writing is called Despite the Height and it’s the small version of the bigger one to come. With all my accolades I’m only 5-foot-6 and I’ve accomplished so much. I’m excited for the kids to read it and hopefully become inspired from the things I’ve done and been through,” said Ivory.

Constantly keeping busy working to benefit others, Ivory Latta is a shining example of a truly genuine role model and to her, giving back to others is something she has always been inspired to do even if she wasn’t a pro basketball player.

“I always wanted to give back. Not having a role model contributed to that but I also look around and see a lot of things going on that shouldn’t be going on. I always look around and say what can I do to help make someone become better that day. Being in the community and doing charity work, it’s something I want to do and something I love doing and I’ll continue doing it for the rest of my life whether it’s small or big,” she explained.

“I always tell people that you don’t have to have a lot of money to change people’s lives, giving time to that person means more than pulling out a million dollars because you can never get time back.”

Though women’s professional sports have become more popular over the last decade or so, there is still a large shadow hovering over their accomplishments by the accolades and heroes of the men in the major North American leagues. As a woman, the importance of being a constant positive presence in society holds a special importance to athletes such as Ivory Latta, and it is being a woman that makes their work important for our female youth.

“It’s very important because to be honest were not as seen as much as the male players. It’s easy for young men to look at Kobe or LeBron because they’re always on TV and it’s really hard for a young women to look at a WNBA player or other female competitors because to be honest women are not seen as much and we do a lot of great things and that really bothers me because I’m really based on equal opportunities and we should have the same equal opportunities that the guys do,” stated Ivory.

“Young ladies will have the chance to look at us in a different way and I’m just going to continue to stay out there in the community, make sure that these young ladies finish on a strong path and that’s my goal, help them stay out of trouble, get good grades and an education. College was the best four years of my life but I can’t take that back or go back, I just have memories, so I want these young ladies today to get that experience because they will not get that chance back,” she concluded.

With female athletes such as Ivory, the presence of women in professional sports will only continue to grow and her lesson will continue to reach more and more young ladies in our growing society.

To learn more about Ivory’s work in the community and to learn about her camps, visit http://www.ivorylatta12.net/

To learn more about the Parkinson’s Disease Foundation, visit http://www.pdf.org/

To learn more about Habitat for Humanity, visit http://www.habitat.org/ 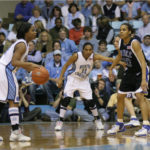 Making an impact twice her size