Milka Duno is sticking to her original plan

You sometimes hear about professional athletes who held different jobs before making it to the big stage, but you never hear of any who were models before their career. Milka Duno of Venturini Motorsports was a model before she became a professional racecar driver, so she was not exposed to the world of racing until later in her life. Although she has accomplished a lot throughout her career, she has succeeded in something more important, her original goal to better the lives of children and others.

“I always thought of having a place to help the people and help the kids. Ever since I was 12-years-old I thought to myself, ‘I will read, I will grow and I will do something for the kids when I am older,’” said the Caracas, Venezuela native.

When she was young her parents instilled in her the importance of education. They taught her about the possibilities that education could bring her and that if she got one she would be able to do whatever she wanted in life because of it.

Duno goes to schools and companies to give motivational speeches and speaks to them about her life experiences and choices as part of her Milka Way program. She likes to give people an understanding of what they have to do to get to where they want to go and how important it is to take advantage of every opportunity that comes their way.

“I think it’s really important for me to speak to the kids because they see a woman who made it in a profession that isn’t a typical place for woman and at the same time they see someone who has an education. I can inspire them to work for everything that they want in life and show them that anything can happen,” said Duno, the first woman in history to win a major international race in the US.

Duno started the Milka Way program in 2004. Her mission through this program is to inspire children and students to aim for the stars and achieve academic excellence. As someone who is a qualified Naval Engineer with four master’s degrees – in Organizational Development, Naval Architecture, Aquaculture and Maritime Business; while earning the last three degrees simultaneously – Milka believes strongly in the value and importance of a strong academic background.

She was named an Es El Momento (The Moment is Now) Ambassador, in which she will be able to highlight the importance of children having role models in their lives, encourage parents to teach by example and instill in their children the importance of education and how it is the key to their success.

“As an Ambassador, I want the opportunity to talk with the kids and parents because I can tell them about my history and how hard my parents were working for me and my brothers to have an education,” explained Duno.

She speaks to thousands of people year after year, hoping to motivate them any way that she can. She tells them about everything that she has been through and what she has been able to accomplish throughout her life, and hopes that they will take it all in and do something successful with theirs. She teaches them the importance of helping out in the community and helping others around them when they are in need and how to live up to their full potential.

“I tell everyone that I want to be an athlete that gives something more to the community, that goes forward with everything. I think that the young people of today have to know how to prepare because it will open the doors for them in the future. They have to help their community, their family and the world around them because with the contribution that everyone puts forward it can help change the world for the better.”

For more information on Milka Duno and the Milka Way program, visit http://milkaduno.com/index.php 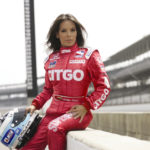 Milka Duno is sticking to her original plan