NBA tips off the holiday season with NBA Give BIG program

This season the NBA launched its first-ever social media photo mosaic at www.NBA.com/NBAGiveBIG to celebrate charitable efforts around the world. The program aims to encourage great work in the community during the holidays with a simple message: Give. Share. Inspire.

By using the hashtag #NBAGiveBIG on Twitter and Instagram, fans can join the teams, players and everyone in the NBA family by sharing their photos, videos and stories from their seasonal community projects. The program is running for just over a month from November 25 through December 31, 2013.

All 30 NBA teams and all 17 NBA Development League teams will host charitable events throughout that time frame, including meal services, food drives and toys drives. Many players, coaches and front office staff will post highlights from their events using the hashtag #NBAGiveBIG.

The NBA has a global reach of more than 475 million fans and followers on social media. Fans can include the hashtag of their favourite team’s three-letter abbreviation (i.e. #OKC, #TOR, #IND) within social media posts to mark their goodwill efforts. The NBA will aggregate all photos on its website at www.NBA.com/NBAGiveBIG and allow users to sort charitable activity by team to learn how people are giving back in different communities.

On Christmas Day, each of the 10 playing teams will host a gift exchange where all players and head coaches will remain on the court following the national anthem to provide a holiday surprise to youth from a local community organization. 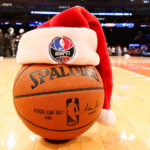 NBA tips off the holiday season with NBA Give BIG program