When we are passionate about something we love, whether it is art, music or sports, it can be easy for our passion to consume our energies and follow us into our everyday lives. Our quest and desire to be the best at the thing we love can be pleasant, but it can quickly become a source of stress or frustration resulting in an unhealthy obsession. Hamilton Tiger-Cats quarterback Quinton Porter has made a living playing the game he grew up loving, but along the way his passion for football began to take a stress on his everyday life. Over the course of the last four years Porter has taken his experiences with football and the impact it has had on his own life and has shared them with many children and at-risk youth through 1st Down Training based out of his hometown of Portland, Maine.

Using the time during his off-season, Porter has developed a football camp that instructs the basic and advanced fundamentals on the field, as well as fundamentals off the field and in our everyday lives. Porter started his career with the NFL’s Houston Texans, which is also when he began hosting camps for kids during his off time. After his move up to Canada in 2008, the off-season became longer, giving him more time to host the camp, changing it from weekends into a 12-week, once a week experience that has grown bigger with each passing year.

At the moment the camp is running for 16 weeks and works to mold each player mentally and physically.

“Football and athletics can show how you’re doing emotionally and mentally. I look to explain ways that you can improve your concentration and focus allowing you to immediately realize ‘Well I threw the ball a lot better there, or I ran that route a lot better because I was able to relax myself and really focus’ and I try to explain that those are concepts you can take into life with you everyday, so each day we try to set a little intention,” Porter explained.

“Things like focusing on our breathing or staying relaxed after a bad play, not allowing it to turn into several bad plays, that’s stuff I had to learn throughout my career and I definitely had many issues with that for many years and I’ve learned how to sort of work through some of that stuff, so that was a big reason why I wanted to pass that on, especially the at-risk youth and the kids that have been in trouble in one way or another,” he continued.

“I feel like the whole point in what I’m trying to do with that is to use athletics to improve people’s lives.”

A lifetime advocate of working with and assisting children, Porter’s experiences as a football player have shaped the way he goes about everyday life as well as his role as a leader to the many youth he helps through the game he loves.

“Football was actually a very stressful thing for me for quite a while and something happened where I said ‘Why is it so stressful for me?’ This is a game and I’m lucky to be able to play, I sort of let go and I started incorporating some techniques that people learn with meditation and yoga and relaxation and letting go of things,” said the Portland, Maine native.

“When I was able to do that with football it improved my life so much, my life became better, I got to enjoy the simple things in life without stressing about football so much. It was constantly in my head all the things I did wrong in practice or something like that and I sort of was able to completely stop doing that once I realized the truth to some of those things and once I realized that and how simple that was,” he elucidated.

“Believe me, it’s still something I’m trying to work on now, it’s not ever a completed process and I go up and down with having stresses in my life but it was such a big change for me that I wanted to throw that to other people, so that’s why I approach the athletic training with the kids the way I do.” he explained.

“I can usually see which kids are getting down on themselves when they make a bad throw and I can imagine if that’s what they’re doing when they make a bad throw it’s probably what they’re doing when they’re at school if they don’t understand a concept or if a girlfriend says something mean to them. I want to show them different ways that you can let go of things that have come in the past and let go of the major expectations you have in the future and just live in the moment and give it the best you got and not being so attached to the outcomes. They’ve responded great, they love it, we have fun doing it and the kids that have been coming to me for a few years now and I’m really seeing great improvements and getting great feedback from their parents.”

Assisting the Tiger-Cats quarterback are his brother Luke, who played three years as a center for the University of Maine, and former Baltimore Raven Kendrick Ballantyne who join Porter as camp coaches. Alongside 1st Down Training, Quinton is planning on building an indoor football field in the Southern Maine area.

“There are indoor soccer fields but there aren’t any football fields, so what I’m trying to do is build something called the Maine Athletic Center which we’re starting a 501(c)(3) non-profit organization for to build an indoor football field, soccer field, a few basketball courts, batting cages and sort of have this approach to athletic training which is working on the mental and emotional aspects, as well as the physical aspects all under one roof. One of the owners of our hockey team in Portland has agreed to donate the land and make a sizeable donation to it, so we’re going to work on fundraising for that and it’s something I’m excited about.”

Like his role on the field, Quinton Porter continues to work with and pass his knowledge onto those willing to receive.

To learn more about 1st Down Training, visit www.firstdowntraining.com 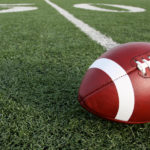