Rob Bironas is giving back with a kick of music

Some of the most successful people in the world have reached their achievements by working harder than those around them and staying focused on their goal. These people have also had supporting casts involved in their lives that helped them along the way. The greatest athletes, musicians and social icons have all reached the heights they sit at because of the assistance they received in support of their hard work.

When Tennessee Titans kicker Rob Bironas finally reached his dream of being an NFL starter, the Louisville, Kentucky native was 27-years-old. His road to the NFL was a long, winding one that was filled with many sidetracks and bumps, but through hard work, determination, focus and help from those around him, Bironas was able to not only reach his goal, but surpass every expectation he had. Since breaking into the league Bironas has broken the NFL record for most points by a kicker in a game, most field goals in a game, is currently tied for first for most game winning field goals in the NFL and has been an All Pro and Pro Bowl selection. Eight seasons into his career Rob Bironas continues to put up solid numbers and says his success has a large part to do with the team around him. As a strong believer in teamwork, Bironas preaches about its importance both on and off the field.

While he’s not playing or practicing with the Titans, the PFWA’s 2007  Golden Toe Award winner works closely with The Rob Bironas Fund in efforts to support children’s causes through music. Founded in 2008, The Rob Bironas Fund connects the fundamentals of music with those of everyday life through the importance of teamwork.

“A lot of guys in the locker room do stuff for sick kids and a lot of different organizations that serve great purposes, but I wanted to do something a little different. Being here in a music city I kind of rediscovered my love for music and I feel it’s something that has an impact on everybody’s lives,” said the Auburn graduate.

“I started looking into it a little bit and started seeing the scholastic influence it has on kids in terms of practicing and failing to succeed. It’s something that was quick to be cut out of school budgets and athletics are always well funded so I thought it was something to bring light to and help out because the responsibilities and discipline it takes can be compared to the athletic world and being on stage entertaining is like being on the field entertaining,” he added.

An avid music lover, Bironas and his Foundation constantly work to acquire new and exciting methods to connect children’s development with the core concepts of music.

“I think music teaches kids a lot of life skills. Learning to play an instrument or getting together with a band, whether it is big or small, teaches responsibility, discipline, hard work, teamwork and focus. Everything I’ve learned on the football field can be gained through music in terms of social skills.  It’s something that if kids catch on to it they learn to love it and want to work hard on it,” Bironas explained.

Aside from funding and spearheading The Rob Bironas Fund, Rob is also very active with organizations such as St. Jude Children’s Research Hospital and the Make-A-Wish Foundation and feels there is no better satisfaction in life than making a difference in a young life.

“I just love working with any organization that helps out kids and I work a lot with the Make-A-Wish Foundation. There are countless organizations I’ve helped over the years and I always want to give back to kids because they don’t always have the choices or proper knowledge,” said Bironas.

“With some of the kids who receive help, you don’t know which ones are going to make it so to be able to put a smile on their face and take their minds off their battle just for a day means so much to them. To be able to make their wish a reality is really just unbelievable,” he added.

“Last year we raised funds to have a kid go out to California and custom make his own drum set. That was really special.”

In 2010, the Bironas Fund worked closely with the Nashville Symphony to instill a new educational program in connection with the Country Music Hall of Fame that would assist hundreds of children in various aspects through music. This idea was unfortunately cancelled when torrential rains led to a flood in Tennessee that left many homeless and claimed many lives.

“We had to backtrack on a lot of different areas in the city itself and funding was needed to help rebuild the city so that kind of got side tracked. That was our large project we were trying to get going but unfortunately that idea didn’t happen,” said Bironas.

“Lately we’ve been meeting with a lot of different organizations like Rocketown which aims to keep kids off the streets, help push kids in the right direction and give them a sense of accomplishment and desire while learning to love music,” he elucidated.

As Rob Bironas continues to see success with the Tennessee Titans on the football field he works just as hard off the field and is not only teaching others the gift of music, but continues to learn the ropes himself. His aim to guide children and provide them with something to hold on to continues to grow and his mark on the Tennessee community flourishes with it.

To learn more about The Rob Bironas Fund, visit http://robbironas.com/bironas-fund/ 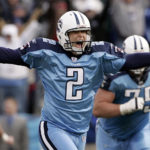 Rob Bironas is giving back with a kick of music