While on the field stalking opposing quarterbacks, Ron Brace can be a daunting figure. Standing at 6-foot-3 and weighing in at around 330 pounds, the Springfield, Massachusetts native has made his presence felt as a defensive tackle for the New England Patriots. Since being drafted by the Patriots 40th overall in the 2009 NFL Draft, Brace has been committed to not only his organization, but to the town in which he came from. An advocate for youth development, Ron Brace is heavily involved with youth mentoring in his hometown of Springfield, Massachusetts. He played a key part in the town’s rebuilding after the devastating tornado that ripped through the city and is active within cancer benefits such as the Miss Pink Pageant.

The Miss Pink Pageant is an annual benefit event that celebrates the lives of breast cancer survivors. All contestants have or survived breast cancer and all proceeds go to the fight to end the deadly disease. Brace has served as a volunteer judge for the event; something he says is a pleasure to participate in.

“I had a few family members that had cancer and so I figured it would definitely be good to take on this experience and when I got there it was something else. You’re guaranteed to cry because the stories of these women are so touching and just to see their strength, it’s amazing. These women were given time frames to live and most of them make it to the pageant,” explained Brace.

“The winner from the first pageant I went to actually just passed away. When I saw her at the pageant she looked like a woman that was never told she would die. She lived her life to the fullest and really made me want to live my life and do more with it. Before, I would just do what the team would ask me to do but I have such a different outlook now. I did the Miss Pink Pageant again this year and I’ll do it until they ask me not to, and even then I’ll still be coming back just as a supporter.”

In 2011, Brace’s hometown of Springfield, Massachusetts was heavily devastated by a tornado that destroyed many homes and employment buildings, leaving many homeless and without jobs. Shortly after the tornado, Brace was on his way to a Patriots charity event in which he travelled through his old stomping grounds. The ride provided him with a first-hand look at the devastation and severity of what had happened, inspiring him to take action and restore what had been taken from so many people, including himself.

“The tornado tore down a lot of houses, a lot of people were without homes and jobs and I remember driving through there and thinking to myself that it was crazy. Seeing the wreckage of my childhood home made me tear up,” said Brace.

“My grandparents didn’t let me know, but my old house went up for auction and someone ended up buying it for dirt-cheap. If I had known I would’ve bought it just for the memories, the materials that reminded me of the past are all gone. My medals from high school and college, everything I had award-wise was in that house so I’m just going off of memories of all of that stuff,” he continued.

“I was going to a charity event for the Patriots to celebrate volunteers and we were giving out awards and I remember Mr. Kraft told me that he wanted to help out, I didn’t even have to say anything to him, he offered to help before I could even bring it up.”

By teaming up with United Way and with help from the Patriots, Brace helped raise over $200,000 in just over three weeks for the Springfield tornado victims. Ron also took part in the rebuilding process in a community initiative called Rebuild Together.

“We rebuilt a lady’s backyard who had damage from the tornadoes, so we did a lot of yard work and I learned how to build a fence during that event,” mentioned the defensive end out of Boston College. “We had a good turnout, a lot of volunteers. Just being able to help this woman was great and seeing all the people helping out was even better. It’s nice to see a town work to get better after a tornado set it back.”

Since his involvement with the tornado relief, Ron Brace has continued to visit Springfield on a regular basis to speak with the kids and provide guidance and leadership to the youth.

“I basically wanted to bring some things into the community because I know when I was there I never saw charity events or that many people reaching out. There were a few things from people within the town, but nothing really from outside the city. so it’s something to let these kids know that if I can do it, you can do it. It takes you buckling down and knowing what you have to do,” said Brace.

“What I tell the kids, especially the ones where I came from, I tell them I want them to be better than me because they can, it’s possible, you just have to put forth the effort,” he added.

Aside from taking time to speak with youth, Ron also helped out Jamie Silva at the Jamie Silva Football Camp, something Brace says he hopes to continue in the future.

“I helped out at Jamie Silva’s football camp for the first time this year and if he invites me again I’ll definitely be there because it was a blast talking with these kids and teaching them things I wish I knew. In Massachusetts there aren’t many good football coaches that really know how to teach the game, so I pass on any knowledge that I wish I had gotten at an early age to them, especially if it applies to what they’re doing. I teach them how to live healthier and the importance of gaining weight and size through proper weight lifting and diets,” he elucidated.

Throughout his road to the NFL many doubters stood in Brace’s path, but he never let them get the best of him. He used the non-believers as his motivation, and though he never had figures such as professional athletes speaking with and sharing their knowledge with him, Ron drew inspiration from his closest role model, his father.

Ron Brace exemplifies a true, hard working, blue-collar professional. His honesty and passion for others makes the heart on his sleeve glow and the love for the people of his hometown can only be described as admirable. A player who understands the importance of opportunity and belief, his roots have kept him humble and always craving more, whether it be starting games with the Patriots or starting the young people of Springfield on the right path.

To learn more about the Miss Pink Pageant, visit http://www.misspinkpageant.com/

To learn more about the United Way, visit http://supportunitedway.org/

To learn more about what Ron Brace is doing within the community, visit his Facebook Fan Page 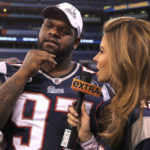