When we are truly passionate about something there is almost nothing that can take us away from accomplishing the task or goal we possess. For Hamilton Tiger-Cats defensive back Ryan Hinds, his passion and love for football can only be matched by one other thing, his desire to help the children in his home country of Guyana. The 2009 second-round pick of the Tiger-Cats was born in Georgetown, Guyana and moved to Toronto, Ontario at the age of eight, where he would develop his love and skill that would eventually lead him to the CFL. This past January, through what could be called fate, Hinds teamed up with Guyana Help the Kids and a few months later took his first trip back home in an experience that would inspire and ignite a passion within the 26-year-old.

“I’m doing an informal internship at McMaster Children’s Hospital and I had mentioned to one of the doctors that I was from the country of Guyana and he actually does work in Guyana and has been doing it for about 10 years. When I mentioned to him that I’m always willing to help out he told me about the project that he was trying to undertake which was to open up a new pediatric ward in Guyana, in the main public hospital which is called the Georgetown Public Hospital,”  Hinds explained.

“When he asked me if I wanted to be a part of the whole project I jumped at the idea for a couple reasons. One was obviously because it’s a blessing for me to be able to give back to my native country and the second was because I’m also very interested in medicine,” he continued. “I did my undergrad in pre-med biology so I have that background where anything to do with medicine interests me, so after talking about the project he asked me to come on and spearhead the project and that’s how it all started.”

In March of this year, Hinds, alongside members of Guyana Help the Kids, went to Guyana to witness the country’s health care situation first-hand. The visit ended up being Ryan’s first in 18 years.

“It was actually my first time going back since I was about eight-years-old or so,” said the defensive back out of the University of New Hampshire. “We could see first-hand what the needs were and talked to the different hospital officials and figured out what could be done and how we could help. Basically we came up with the idea that they would provide an area and we would furnish it and since then the fundraising efforts have been going on.”

With a goal of $75,000, fundraising efforts have taken place since their visit to Guyana and have included events such as charity dinners in both Hamilton and Toronto, and an upcoming event called Touch-a-Trailer, taking place at Hamilton’s Robar Centre on September 30th. The Touch-a-Trailer event is a family-based event that gives kids of all ages the chance to check out 30 different heavy machines we see everyday, as well as the chance to tour inside fire trucks, ambulances and various motorcycles. The event will be the third official fundraising effort by Hinds since March, and will be followed by many more.

“The fundraising is going well, but there’s a lot of money that needs to be raised because anything to do with the word ‘medical’ is very expensive and so to furnish an entire ward is going to take some time. We’re on our way, but we’re certainly not there yet.”

Though Hinds faces a large task, his ambition and drive comes easily and naturally. His push to make a difference is inspiring to not only those who look up to him in Canada, or CFL fans, but for the number of youth and children in Guyana that will one day receive the medical care and attention they deserve, what every child deserves.

“I think whenever you’re blessed, and I consider myself blessed, being in the position I’m in playing in the CFL, I think it’s not only nice to but I think it’s our duty to give back. Giving to the place you come from makes it true in your heart. It’s not just something I’m doing because it sounds good or whatever, I’m doing it because I want to do it. When I went back to my home country for the first time in March, to see it all first-hand and realize these are your people and this is where you come from, it gives you an extra drive to make a difference and you push to really make a difference.”

To learn more about Guyana Help the Kids, visit http://www.guyanahelpthekids.com/ 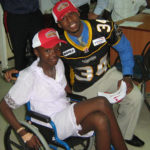