Servando Carrasco helps brighten the future for many

When you truly want something, you will stop at nothing until what you want is yours. That is how Servando Carrasco of the Seattle Sounders FC has lived his life since he was a young boy. As someone who has always had a love for the game of soccer and grew up with the dreams of playing in the pros, Servando and his mother have both worked hard over the years to make playing in the pros a reality. His mother knew that her son was very talented and realized that if she gave him the opportunity to play then someday it would pay off and her son would be living his dream. Servando’s mother Gloria didn’t just open the door for her son to be a good soccer player; she also showed him how to treat others and the importance of giving back to those in need.

“From a very, very young age, my mom and one of my aunts always worked with low-income families and high crime rate communities,” mentioned the Coronado, California native. “They would give them anything from food to clothing and spent time with the kids, so my earliest memory of giving back would have to be when I was about 10-years-old helping them with that.”

As someone who comes from a family that stresses the importance of helping others, the Sounders FC midfielder ended up with an organization that stresses the same thing amongst their players. Always doing something to give back to the community or finding a way to say thank you to their fans, the Sounders are one of the tops teams in the MLS when it comes to showing appreciation in the community.

“I think it’s incredible what the Sounders do. The outreach program here is amazing,” said Carrasco. “They provide us with great opportunities to help the community through organizations like the Boys and Girls Club.”

“The guys have been incredible when it comes to being positive role models for the kids and they take advantage of the opportunities they get presented with.”

Servando Carrasco was named the MLS W.O.R.K.S. Humanitarian of the Month for October for the work that he did in the community to raise awareness towards breast cancer; something that has hit him personally. Servando’s mother Gloria was given a clean bill of health after her five-year checkup in November, after being diagnosed with breast cancer during his time at the University of California-Berkley.

Although Servando has been working with the Susan G. Komen Foundation since his rookie season last year, he wanted to get approval from his mother first before he brought attention to her fight.

“To have her up here and take part in the race, it was very emotional and I’m very thankful for the organization for giving me the opportunity to be a part of it and give back to others who are going through what my mother went through.”

The members of the Sounders do a lot in the community. In fact, with Carrasco being named the Humanitarian of the Month for October he became the fifth different Sounders player to earn the honors, the most of any team in Major League Soccer since they started presenting the award in 2010. Despite being the ones that go out into the community day after day, Carrasco and the Sounders players credit the director of community outreach, Sandy Gregory, for helping the team to contribute to the Seattle community.

“Working with the Susan G. Komen Foundation is something that came out of nothing to be honest,” said Carrasco. “Sandy, the director of the outreach program with the Sounders, came up to me and asked me if I wanted to be a part of it because she knew that my mom was a survivor of breast cancer,” he continued.

“I definitely wanted to be a part of it, but I wanted to make sure my mom was ok with it because it is her story and she is the one who went through the battle. As soon as she told me yes, we went forward with it and were involved in a lot of the planning and the event in general and it was an amazing event and I’m glad we did it as a family and that Sandy gave me the opportunity to be a part of it.”

With the help of Carrasco’s 82-member team that raised over $6,300, a total surpassing $1.1 million was raised towards breast cancer awareness and research at the 2012 event in Seattle.

Aside from working in the community to help raise awareness for breast cancer, Carrasco has also appeared at several of the club’s summer camps and has worked regularly in the United We Serve program.

“For me, I feel like we have a responsibility given the position that we are in and we can help encourage these kids to make the right decisions and stay on the right path and stay in school,” said the 24-year-old. “I love getting involved with the kids and going to the Boys and Girls Club and spending the day there, whether it be helping them with their homework or playing dodgeball with them like we did last time,” he chuckled.

“To give them that attention that they might not get in their household really makes a difference and goes a long way. The kids are the future so if we can make a positive impact right now I think that it can go a long way for them in the long run.”

Working in the community with the children is something that the veterans in the MLS have taught the rookies since the beginning. James Riley, currently playing for Chivas USA, was a member of the Sounders from 2009 until 2011. He was very active within the community and taught his teammates how to be a pro both on and off the field. Carrasco believes that Riley played a major role on the team when it comes to getting them out into the community and helping children and it’s something that they continue to do, even though Riley is no longer with the team.

“He [James Riley] really opened up the door for future players to get involved with the Boys and Girls Club and I think that it is something that a lot of guys have taken advantage of to help make an impact on these kids’ lives. Even if it’s just an hour that we get to spend with them, guys are always jumping on the opportunity of helping out and spending time with the kids.”

Servando has also been involved in the Sounders FC’s Hispanic outreach since joining the club in the second round of the 2011 MLS SuperDraft. He spent his childhood living in Tijuana, Mexico, where he learned to develop his soccer skills to become the player that he is today. After spending his childhood there, Carrasco hopes to one day go back to his former hometown to give back to the children who need and deserve the help.

“In the future I want to do something with soccer in Tijuana. I want to give something back to where I came from. I want there to be a place for youth to play soccer and develop their personal skills on and off the field, that’s my vision,” explained Carrasco.

“I know it’s going to take a long time, but I know in maybe 10 or 15 years I definitely would like to use my time to develop a soccer program that will help them develop skills, not just in the aspect of playing, but the life lessons that can be learned as well through the game of soccer and I just hope to one day have the resources to accomplish that someday,” he elucidated.

Servando continues to serve the Seattle community as much as he can. At the young age of 24 and just two seasons into his professional career, there’s no telling what he will be able to accomplish in years to come.

To learn more about the Boys & Girls Club of America, visit http://www.bgca.org/Pages/index.aspx

To learn more about United We Serve, visit http://www.serve.gov/ 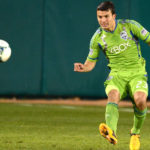 Servando Carrasco helps brighten the future for many