Golden State Warriors point guard Stephen Curry will be heading to Tanzania in a few weeks to support the United Nations Foundation’s Nothing But Nets campaign in its global fight against malaria. Curry, who is coming off a record-breaking season with the Warriors, will visit a refugee camp and distribute insecticide-treated mosquito nets that keep refugees safe from malaria. He will also meet with officials from the Office of the United Nations High Commissioner for Refugees (UNHCR), the United Republic of Tanzania Ministry of Home Affairs, the International Federation of Red Cross and Red Cross Crescent Societies (IFRC), and the Tanzania Red Cross Society to learn about the humanitarian efforts in Tanzania.

This past season was a big one for Curry. He posted career-highs in games started, minutes per game, assists per game and points per game and became the first player in NBA history to drain 250 three-pointers while dishing out 500 assists. He also broke the single-season three-point record as he drained 272 three-pointers, surpassing the previous record of 269 set by Ray Allen for the Seattle SuperSonics in 2005-06, while attempting 53 less three-pointers than Allen did.

His record-setting season could not have come at a better time for the Warriors organization and the Nothing But Nets campaign. The Warriors made the playoffs for the first time since the 2006-07 season, while earlier in the season Curry announced his “Three for Three Challenge” in which he would donate three life-saving bed nets to the Nothing But Nets campaign for every three-pointer he made throughout the season. As someone who has been committed to Nothing But Nets since his time at Davidson, Curry’s record-setting season translates to 816 bed nets that will help provide families with a safe, good night’s sleep.

Now, Curry, 25, will be taking his strong work ethic overseas to help improve the lives of those fighting malaria in Africa. NBA Cares, a founding partner of Nothing But Nets, and the Tanzania Basketball Federation will hold a basketball clinic for local school children while Curry is in Tanzania. He will get to interact with the local children and teach them a thing or two about basketball and life. As a proud supporter of the Nothing But Nets campaign, he will get to see first-hand where the donations go and how they are put to use.

During his stay in Tanzania, Curry will be joined by ESPN’s Rick Reilly, who wrote a column about malaria seven years ago that helped fuel the creation of Nothing But Nets. Since 2006, Nothing But Nets has raised more than $45 million from hundreds of thousands of grassroots supporters and have sent more than 7 million bed nets to families across Africa.

To learn more about Nothing But Nets or to help Stephen Curry fight against malaria, visit http://nothingbutnets.net/

To find out more about what Stephen Curry is up to, visit http://stephencurry30.com/charity 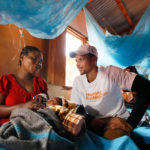