In today’s modern society, the notion that professional athletes have just as much or more of an influence on our youth than a President or Prime Minister is a pretty obvious one. In fact, it’s been this way for more than a decade. As the spotlight continues to grow on today’s athletes, it is no surprise to hear that more kids receive and respect the words of wisdom coming from their favourite athlete over that of a political figure. This being said, athletes have never had to be more careful in what they do and say in front of the camera, out in public or over social media. Pittsburgh Steelers linebacker Stevenson Sylvester is fully aware of his importance to young football fans and has embraced his position as a role model with arms wide open.

Since joining the Steelers in 2010 the Las Vegas, Nevada native has been highly involved in various charitable causes in both Pittsburgh and Las Vegas.

“I do a variation of different things, a lot of the guys have different foundations and there’s a whole bunch of charity work in every city really, so I try to pick up as much as I can,” Stevenson said. “LaMarr Woodley has a lot of different events and charity stuff he always does so I end up helping him a lot because he’s a fellow linebacker and he does a lot of work with kids and does a bunch of other little things that help benefit others,” he added.

Though Sylvester doesn’t run or operate any charities of his own, he is constantly taking part in team initiatives and is a constant presence in the Pittsburgh community, especially around the holidays.

“I haven’t set up any charities or foundations yet so I try to stay busy with other stuff. Around Pittsburgh last year I did a lot of things around the holidays. At that time it picks up and they need a lot of help and being a professional athlete it attracts more attention, too, so it’s very beneficial for them,” Sly explained.

“I just try to help out; whether it’s me going in there and helping pass out food at Thanksgiving or Christmas or hanging out with the kids,” he continued. “We do artwork, things like making ornaments, stockings, caroling with the kids and fun things of that nature.”

Growing up in Las Vegas, Sylvester was never exposed to the opportunity of having athletes such as himself help out with charity causes within the city because they have never had a professional team of such magnitude. As of late, St. Louis Rams running back Steven Jackson, who is a Las Vegas native, has held a couple charity events in their hometown, which Sylvester says is a great opportunity for the residents’ youth.

“It was really cool of Steven to do that because it gave those kids a chance to see guys like us doing good things. If you get kids excited about things like that they stay out of trouble and they end up doing more of the right thing,” he said. “Especially in this world where a lot of things are going wrong you want to keep kids out of trouble as much as possible so you keep them busy, make sure that if they keep their grades right and do the right thing they can hang out with guys like us and for doing good we’ll take care of them,” elucidated the Steelers’ 5th round pick in 2010.

Sylvester credits his own childhood heroes to his current involvement with today’s youth and charity and says that the platform athletes such as himself are held on is so important in keeping guys in check and fulfilling their roles in the sports community.

“It always goes back to when I was a kid, I always looked up to professional athletes because it’s something I always wanted to be. I just thought they did everything the right way, you know. A lot of kids want to play sports, and so they look up to us a lot and we want to lead by example. We do that by showing them to do the right thing by helping out and being nice to people and showing them the right way to handle things and explain the little steps you took to be where you are,” he explained.

“I just try to influence the kids and show them that we’re just as human as everybody else and to go about things the right way,” added Sly.

Though professional athletes have a negative stigma given to them by many in the outside community, guys like Stevenson Sylvester provide a pretty good example of the realization that most athletes in his position are thankful and embrace the role associated with their line of work. Whether he is stepping onto the field for a game or practice, or if he is heading out onto the streets of Pittsburgh, Sylvester is proud to be a role model to so many young minds and does his best to fulfill his duties day after day.

“My favourite part is just seeing the smiles on the children’s faces just because I’m there. I’m not doing anything different from the teachers, councilors or hosts for the event, but just me being there keeps the kids on their best behavior and keeps things fun. I remember when I was younger how much better everything was when I was having fun and if I can make it fun for the kids by just being there and being an influence it means so much and that’s what I always try to do. Its crazy to think about how much your presence can affect someone,” stated the Las Vegas, Nevada native.

“I want to be remembered as a good role model and someone kids want to be like when they grow up. I don’t want people to be mean or disrespectful so by carrying yourself the right way and being a leader kids will see that and hopefully follow in our footsteps,” concluded Sylvester. 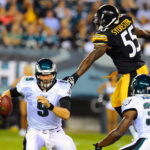